Chōjūrō (長十郎, Chōjūrō) is a member of Kirigakure's Seven Ninja Swordsmen of the Mist and wields the twin sword: Hiramekarei.
Despite his membership in the elite Seven Swordsmen group, he is a shy individual and seems to lack confidence in his abilities. He also admires the Fifth Mizukage greatly, as he commented inwardly on wanting to protect her "beautiful smile". By the time of the Fourth Shinobi World War, Mei has noted that he has become a lot more confident in himself as seen when he cut down Black Zetsu without reservation and then declares to the Fifth that as a member of the Seven Ninja Swordsmen of the Mist, he would guard the area with his life.
Chōjūrō has short, tufty blue hair, and dark eyes. He also has pointed, shark-like teeth; a trait that all known members of the Seven Ninja Swordsmen of the Mist as well as apprentices share. He wears square, black-rimmed glasses connected to ear protectors, a blue pin-striped shirt and camouflage pattern pants. Also, he wears his forehead protector on the front of his holster which he uses to carry Hiramekarei. The sword itself is wrapped in bandages leaving only the double hilt visible. He also has shuriken holsters strapped onto each of his legs. During the Fourth Shinobi World War, he still wears the same outfit but changed his forehead protector to that of the alliance's.
Despite his meek demeanour, Chōjūrō is a capable ninja, whose skills made him a member of the Seven Ninja Swordsmen of the Mist, a group made of Kirigakure's strongest swordsmen. The fact that he was chosen as one of the bodyguards for the Fifth Mizukage during the Kage Summit implies that he is quite powerful.
As a sword user, Chōjūrō wields a dual-handled sword called Hiramekarei, that is linked together at the handles by a chain. When released from its bandages, it releases chakra that can be shaped in to weapons. He was only shown to have created an enormous hammer, and a massive sword in an instant after storing a large amount of chakra in the blade.
Chōjūrō is shown to be strong enough to wield Hiramekarei in its hammer form and is capable of sending an opponent flying a considerable distance even if they have a strong defence, like Susanoo.
Chōjūrō and Ao were chosen to escort the Fifth Mizukage to the Kage Summit. During their trip to the Land of Iron, Chōjūrō was frequently embarrassed by the Mizukage's concern over him, which earned him scolding from Ao. Once they finally arrived and the meeting began, Ao and Chōjūrō fulfilled their duty of guarding the Mizukage, coming to her aid during the Fourth Raikage's outburst and Zetsu's appearance.
When Sasuke Uchiha infiltrated the summit, Chōjūrō activated Hiramekarei and used it to knock Sasuke into an adjacent hall where the Mizukage could fight him alone. Although Sasuke was able to escape, his actions convinced the Kage to begin working together. As a sign of good faith, Chōjūrō told those in attendance about Kisame Hoshigaki and his Samehada.
After leaving the Summit with Mei, they followed Ao, who was following Danzō. When they reached Ao, the Mizukage stopped Ao from beheading himself. She realised that he was under an enemy's control, and requested to use Hiramekarei to force him out. Fū insulted her upon learning that she knew he wasn't really Ao, and she quickly punched Ao before realising that the opponent had already released the technique. Later, when they return to Kirigakure they are informed that the daimyō had approved the formation of the Shinobi Alliance.
Chōjūrō attends the last meeting that is held in order to fully prepare for the war. The Mizukage tells him to contact Ao in the Sensor Division and tell him that they need to hurry. Chōjūrō travels with Mei Terumī to guard the daimyō during war. When Black Zetsu locates the daimyō, he is intercepted by Mei. Chōjūrō appears alongside Genma, Raidō and some other Kirigakure ninja arriving shortly after to back her up.
They continue to battle Black Zetsu throughout the night. One of Naruto Uzumaki's shadow clones arrives to help in the battle. During the fight one Black Zetsu's branches catches Naruto's foot, causing his attack to miss. Chōjūrō uses the opportunity to attack from behind with Hiramekarei. He cuts through Black Zetsu, and says that the more confident he is the stronger the strike. He then pinned Black Zetsu to the ground with Hiramekarei. Chōjūrō tells Mei who was being called away to deal with the revived Madara Uchiha that as one of the Seven Ninja Swordsmen of the Mist he would defend that point with his life. 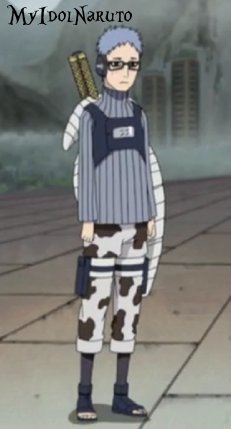