Akaboshi (アカボシ, Akaboshi) is a member of the Magaki Group, aiming to steal the Tsuchigumo clan's kinjutsu.
Akaboshi is portrayed as a calm, serious, and clear-headed individual. The way he orders the rest of the Magaki suggests that he is the leader or second-in-command of the team when Shiranami is not present. He also is a capable analyst as shown when he ordered his team to retreat when faced with Utakata's Six-Tails' chakra.
Being a part of the Magaki Group, he specialises in collaborative techniques in which he is the one usually launching the jutsu while the rest of his team transfer their chakra to him.. He can see and shatter barriers or create a pyramid shaped barrier that explodes. He can also create a barrier made of light purple chakra that can paralyse and drain an opponent's chakra which varies in strength. If need be, Akaboshi and his teammates can bind an opponent with a black rope. Offensively, he can create a large shard that breaks up into smaller shards to impale the opponent, or utilising the lightning nature, he can slam the ground with his hands and cause lightning to travel through the ground to underneath the opponent. With his teammates he can do a combination transformation.
Akaboshi and his group headed to Mount Katsuragi to search for the Tsuchigumo clan's kinjutsu. He was able to destroy the barrier within the mountain with the help of his group. They ran into Tonbee, whom Akaboshi and his group defeated quickly. Akaboshi and the others discover that Hotaru has the jutsu and begin searching for her.
Later, Akaboshi and his comrades are seen receiving new orders from a mysterious man. After meeting with their leader, the four-man team encountered Utakata, who single-handedly bested the group until they caught him in their barrier technique.
After this, the group headed to the Tsuchigumo Village, where they ambushed Hotaru with the help of the villagers in the hopes of getting the kinjutsu. However, the scroll that Nangō hands him turns out to be a rigged trap, which explodes, allowing Hotaru to escape. Akaboshi and his team pursue Hotaru, and, just after catching her, are interrupted by Utakata, who claims to have business of his own with Hotaru.
After Utakata escaped with Hotaru, Akaboshi and his squad were confronted by their leader, who showed them that Utakata was a missing-nin from Kirigakure with a bounty of 50 million ryō. Akaboshi asked their leader what they should do, to which he began to muse about.
The next day, after Naruto Uzumaki found Shiranami, the Magaki leader, whom Naruto thought was an ally, Akaboshi and his comrades ensnared Naruto with Infinite Embrace. While Chūshin tortured Naruto, Akaboshi stopped Benten from revealing too much of their plan. Angered at being deceived, Naruto's Nine-Tails chakra activated and broke the jutsu. Telling his team to stand their ground, albeit slightly frightened that Naruto broke the barrier, Akaboshi and the others used a stronger barrier to crush Naruto. Despite this, Naruto was able to get back on his feet. Suddenly, Utakata appeared and got the bandits away from Naruto with Acid Permeation. He angrily demanded that the Magaki tell him where they took Hotaru, intimidating them with his Six-Tails chakra. Sensing danger, Akaboshi ordered his team to retreat and join Shiranami in the Tsuchigumo village.
That evening, after Naruto and Utakata returned to the village, it was revealed that all the villagers had been hypnotised to fight the Konoha forces. Akaboshi ordered the villagers to kill the jinchūriki. Before any further action could be taken, the rest of Team Yamato arrived in search of Hotaru, with Yamato and Sai cutting off the villagers. Akaboshi used his lightning technique to free the corrupted townspeople and he and the rest of the Magaki engaged Konoha in battle. He swore after Chūshin attempted to attack with his shuriken, only to have Yamato block it with his Wood Release. Eventually, all four of the Magaki were defeated by Team Yamato. 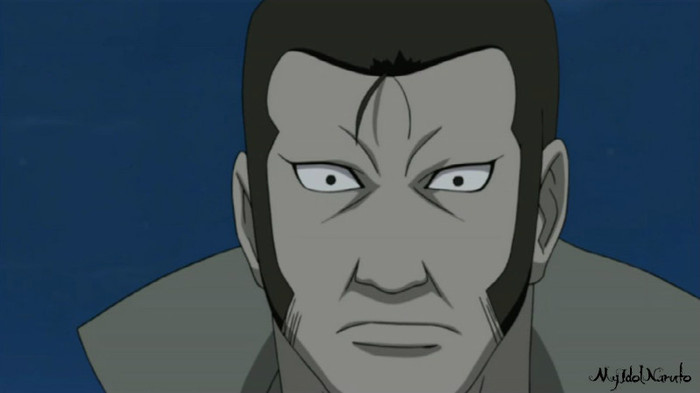