Chibi (チビ, Chibi) was an abandoned dog that Nagato found while wandering around the streets after his parents were killed.
While wandering around the war-torn Amegakure, Nagato collapsed due to hunger. On the verge of death, he was approached by Chibi, who gave him the will to go on.[1] They were later found by Konan, who shared her food with them. Chibi and Nagato joined up with Yahiko and Konan, stealing food from local vendors. The Ame Orphans later wandered too close to the battle between Hanzō and the Sannin, and Chibi was killed in the crossfire. The orphans later buried him and mourned for his loss.
Chibi was a relatively friendly dog and extremely loyal. Always sticking by Nagato's side even though he had no food or shelter to offer Chibi. Chibi was also curious as shown when Konan made a paper dog out of origami and Chibi seemed relatively interested in it.
Chibi was a small dog with pointed ears and furry tail. He had brown fur on his back, tail, ears and atop his head, legs and lighter brown fur on his stomach and the rest of his face. Chibi often had a sickly appearance and was shown to be quite skinny but he always seemed to liven up whenever he was around the Ame Orphans. 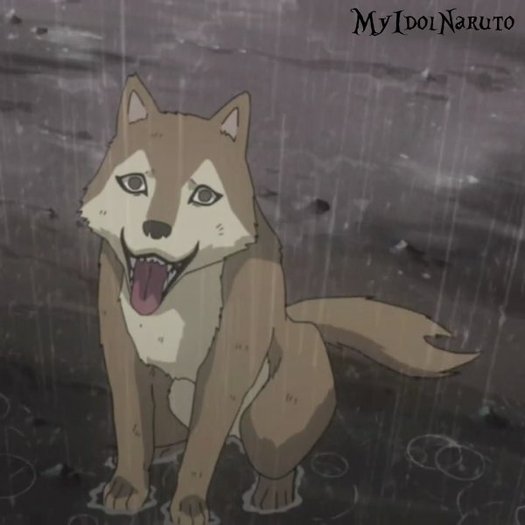