Shibi Aburame (油女シビ, Aburame Shibi; "Gen" in some pieces of Naruto media) is a jōnin-level shinobi from Konohagakure's Aburame clan.
Shibi is just as stoic and silent as (if not even more so than) his son. He is described as a "self-possessed figure, and the pride of Aburame".
Shibi, like all members of his clan, has his eyes obscured by dark glasses which feature a single tassel hanging down from one-side. He has very spiky short black hair and a moustache. He typically wears a high collared outfit, while carrying a gourd on his back that is used for holding more kikaichū. He also tends to keep his hands in his pockets a lot, another trait he and his son share.
During the Fourth Shinobi World War when Shibi is seen again, he is now sporting a goatee and wears a hooded variant of his regular high collared outfit; similar to the one worn by his son. He also wears the Allied Shinobi Forces' forehead protector.
During the invasion of Konoha, Shibi used his kikaichū to draw out the poison that afflicted his son's body. Following the invasion, he attended the Third Hokage's funeral.
Over the course of the invasion of Pain, Shibi joins Muta, his son and another unnamed member of his clan in confronting Konan. They use their kikaichū to eat the paper that Konan had wrapped several shinobi in while Katsuyu healed them. He then advises his son to give it everything he's got.The anime expands on this battle and the Aburame can be seen launching a surprise overhead assault on her, however this turns out to be just a clone.
As they look up they realise that they are surrounded by clones of Konan who descend on them. Shibi and his clansmen send their bugs to destroy the clones who, to their surprise, detonate. Shibi tells his son to get away after realising that explosive tags had been placed in the clones. As they narrowly escape the explosion, Konan, who had drenched herself in water to counter the effects of fire and mixed herself in with the clones can be seen walking out of the flames. Later, after the invasion's conclusion, he returned to the devastated village in order to celebrate Naruto Uzumaki's defeat of Pain.In the anime, Shibi is present at the war council meeting that Tsunade convenes.
During the Fourth Shinobi World War, Shibi was sent to the Island Turtle alongside several other Konohagakure shinobi, to ensure that Naruto remained within the confines of his training room. When Naruto attempted to leave the temple, Shibi tried to convince him to stop by proposing that they talk once he had returned, however, Iruka interjected that he would do it instead.
In spite of his conviction and the assistance that he provided to Iruka's fictitious story, by asserting that Yamato's absence was due to his abilities being required elsewhere, Shibi's attempt to deceive Naruto ends in failure and results in the violent eviction of his entire team from the temple. Now outside, Shibi reluctantly allows Iruka to describe a truthful account of current events but this too fails, causing Shibi to disperse his kikaichū in order to stop Naruto. However, after the chakra of the Nine-Tailed Demon Fox proves too much for his bugs, Shibi orders Temui to alert the Barrier Squads in the area, while everyone else continues with the pursuit.
Shibi was assigned to a team with Minato Namikaze and Chōza Akimichi to intervene in the crisis in Rōran, where a Konoha missing-nin from the future called Mukade is building a Puppet Army using the power of the Ryūmyaku, an ancient chakra flow deep underground the city, and plans to change the future to his favour, conquering the Five Great Shinobi Countries. Minato asks the Third Hokage's permission to bring his student, Kakashi Hatake, and the Hokage agrees. 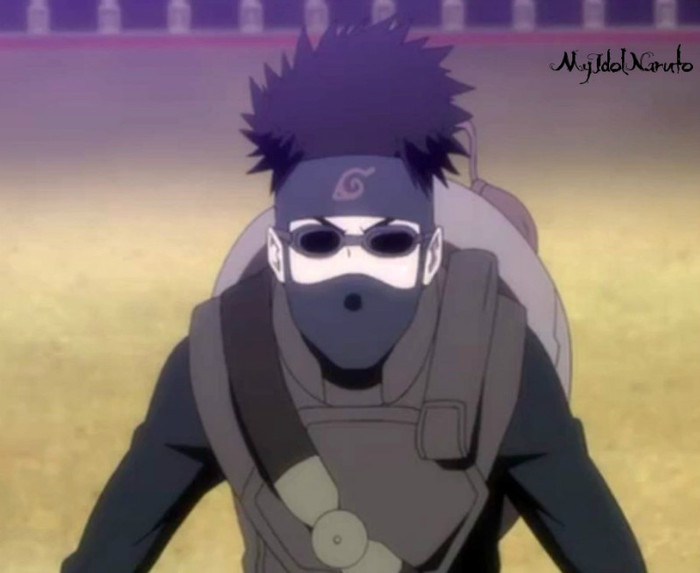