Amaru (アマル, Amaru) is Shinnō's apprentice that appears in Naruto Shippūden 2: Bonds.
Amaru is a girl who came from a village in the Land of Fire. When she was small, she suffered from a strange illness. No one tried to help her, fearing that they would be infected. Because of this, she became alone and shunned from social interaction with the people of her own village all her life like Naruto and Gaara. Later, she was cured by a kind doctor named Shinnō, whom Amaru grew to idolize. After which, Amaru insisted for Shinnō to make her his student, to which he agreed.
Amaru, being treated as an outcast for her entire childhood due to her illness, became lonely. Therefore, when Shinnō, the first person to treat her with kindness, came along, she immediately grew attached to him. She at first requested for him to teach her the ways of combat, in the hopes of avenging her deceased parents, but with the elderly doctor's (later proven false) ideology of saving people being more important, Amaru also adopted this belief. Her admiration for Shinnō borders to the point of love, and Naruto even suspected it to be romantic, though she awkwardly denied it. When Shinnō supposedly died, Amaru was devastated, and was susceptible to the darkness within her. This, however, was nothing compared to when Shinnō revealing his true colours, in which Amaru suffered a severe mental collapse. However, both times, when she nearly succumbed to the darkness, Naruto managed to save her, and gave her a new will to live. Even with this betrayal, Amaru still loved Shinnō, and confessed to him, as well as expressing concern for when Shinnō was defeated by Naruto and Sasuke.
Amaru is a tomboy, and along with her way of dressing, Naruto mistook her for a boy to begin with. She tends to lash out at Naruto at first, sending him flying out of the broken window for being close to her face in the Konoha Hospital, and then slapping him for suggesting that she is in love with Shinnō. However, it is suggested that she developed a crush for Naruto.
Amaru is a girl who has long reddish-brown hair, though she kept it wrapped in her blue bandanna. The bandanna was her way of emulating her beloved teacher, Shinnō, but is different in colour and is longer in the cloth's length. Before this, Amaru wore a blue head band, which did not cover up her long hair. After Shinnō's false death, Amaru was given her red bandanna, which she wore in place of her own, until Shinnō took it back and tore it to pieces. Amaru has rather thick eyebrows and blue eyes, and a mole under the left eye. Amaru also wore a cyan-blue gi with a cream-colored vest over it, which covers her cleavage, blue shorts, and dark arm- and leg-bands.
Overall, due to her dress-style covering up her cleavage along with her tomboyish attitude, she was at first mistaken as a boy by Naruto Uzumaki.
Having been under Shinnō's tutelage for a while, Amaru is a competent medic. She demonstrated her medical aptitude when she applied first-aid treatment to Naruto after he was poisoned by envenomed carnivorous fish that reside in the river around Amaru's village. She wields a scalpel that her mentor gave her, and uses it mostly for surgical purposes, but also demonstrated usage as a tool to pick the lock on the prisons within Ancor Vantian.
After the infamous ninja from the Land of the Sky decimated Konohagakure, Amaru arrived to aid in healing people alongside her sensei Shinnō. She quickly made it clear how much she admired her teacher. After helping with the injured, she and Shinnō were escorted back to their village by Naruto, Sakura, and Hinata. Upon arriving at the village, they discovered that it too was destroyed by the Sky ninja.
Horrified by the sight, Amaru accidentally triggered a trap that would have killed her had Shinnō not saved her at the cost of his own life. From her mourning, the Zero-Tails, which was sealed within the Land of the Sky, manifested itself by turning Amaru's negative emotions into Dark Chakra, and attacked Naruto and Sakura, but Naruto managed to suppress its control by comforting Amaru, returning her to normal. Wanting to make her sensei proud, Amaru joined Naruto in rescuing the villagers, which lead them to an old ruins that turned out to be the Sky ninja's headquarters and mother ship. To Amaru's delight, she discovered that Shinnō was still alive. But her joy quickly turned to horror as Shinnō revealed that he was working with the Sky ninja and that the kind man he appeared to be was a lie. He also revealed to have been attempting to conjure negative emotions to power the Zero-Tails by having it gather massive amounts of dark chakra.
Falling into despair, she was given new hope from Naruto who convinced her that while Shinnō himself may have not believed in what he taught her, there is truth to valuing life. Amaru then went off to find and rescue Hinata and the villagers that were locked up. When the mother ship began crashing from the sky, Naruto forced her to join the villagers in a smaller ship, but she chose to jump after Naruto to be there for him for a change. They fell from the sky and they were saved by Jiraiya summoning Gamabunta to cushion their fall. It is unclear what her feelings are for Naruto, but the blush that forms on her face while holding him seem to hint at something more than a mere friendship. 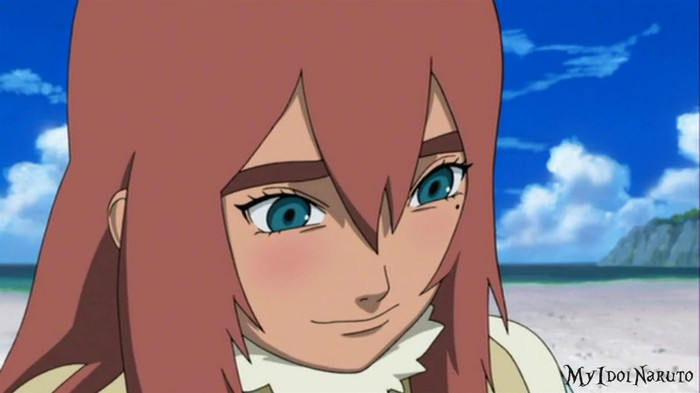