Aoi (あおい, Aoi) is a young girl that appears in Naruto Shippūden: Ultimate Ninja 4, and makes a cameo in Naruto Shippūden: Ultimate Ninja Storm 2.
She is a young girl with green eyes. Her hair is a bluish colour and is short with wavish bangs. She also has some hair on both sides of her face that almost connect near her mouth. When she first meets Naruto, she wears a white robe with a red scarf. Later, she adopts an all green version of her outfit.
When first introduced, she seems cold and uncaring. However, it's just a cover for the pain she feels in her heart for her mother's illness and the earlier loss of her father. After Tsubaki is cured thanks to a Tree of Life leaf, Aoi cheers up and has more emotion in her voice. She becomes fast friends with Naruto, viewing him as sort of a brother figure.
In order to heal her terminally ill mother, Aoi volunteers to become a human sacrifice to the Black Shadow, however her true motive was to kill the demon to retrieve a leaf from the Tree of Life that could be used to heal her mother.
Naruto Uzumaki, who vowed to save Aoi, went to Jiraiya to remove the beads. Aoi was about to be sacrificed, when she heard a crashing noise, she knew Naruto had destroyed the barrier set by the demon. Black Shadow quickly transformed into its true form, a giant black wolf with numerous tails. Naruto attacked and defeated the beast, but Black Shadow was revived. Naruto quickly released the Nine-Tails chakra and battled the beast again, where the petals from the flowers that grew near the Tree of Life in Aoi's charm destroyed the demon for good. Afterwards Naruto said goodbye to Aoi and Tsubaki, she said that she would come to the Konohagakure.
In Ultimate Ninja 4, Aoi had already lost her father and was now concerned about her mother's terminal illness. Worried about her mother's well being, Aoi went into Tree Felling Village to aquire information about medicene that could help. Along the way, she heard rumors about the Tree of Life's leaves, which could cure any illness without fail. However, it had been cut down by the early settlers as it blocked the way into Crystal Cave and the demon Black Shadow consumed its remains to prevent the flowers that gained nutrients from the Tree and affected its sense of smell form ever growing back. She resolves to become Black Shadow's next sacrifice to retrieve the leaves and cure her mother. However, Naruto arrives and tries to talk her out of it. Ignoring him, Aoi proceeded into the cave. Multiple times,she is stopped by Naruto and is tried to be reasoned with. On one try, she finds a withered branch form the Tree, but knowing that it would be useless in her efforts to cure her mother, Aoit abandons it and proceeds further into the cave while Black Shadow sets up a barrier to keep Naruto out. Upon almost reaching Black Shadow's den, Aoi is confronted one last time by nartuo, who has now learned about her purpose. Breaking her cold facade, Aoi cries about her mother and lets Naruto go in her stead while receiving her mother's lucky charm. However, she runs after Naruto when she hears him screaming during the fight with Black Shadow. Luckily the charm shattered and the petals from the Tree of Life flowers overloaded its sense of smell. Black Shadow was slain and a leaf found.
Much later after Naruto finishes his S-rank mission to save Gaara, Aoi encounters him again. However, she had been plagued with dreams about the Tree of Life. This lead her back into the Crystal Cave with Naruto, where she found the Tree's seed. Giving it to the Mayor of Tree Felling Village, Aoi was amazed to see Naruto convince the Mayor have the village renamed Tree Revival to honour the Tree's return.
Aoi returned home and enjoyed a nice dinner with her mother and Naruto, though Naruto won't revisit storywise, she gives him a charm to remember them by.
In Naruto Shippūden: Ultimate Ninja Storm 2 it is revealed in a letter she sends to Naruto that she did but she didn't find Naruto because he was on a mission. She and Naruto swapped letters between each other, and Naruto promised that next time she came to the village he would show her all the places in the village. In her last letter she includes a "Leaf from the Tree of Life" a material item needed to obtain to "Chakra Seal Tag X" ninja tool for sale at the item shop. 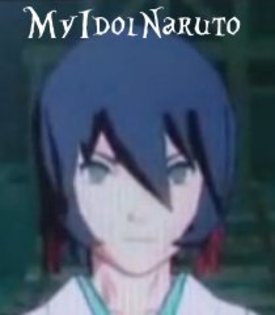