Ayame (アヤメ, Ayame) is the waitress at her father Teuchi's restaurant, Ramen Ichiraku.
She and her father seem to be some of the few Konoha villagers not to see Naruto in a hostile light and consider him their favourite regular customer.
It appears that Ayame has a crush on Kakashi Hatake, whom her father seems to respect as well. During Naruto’s nature manipulation training, they seemed very eager to greet Kakashi when he brought Naruto and Yamato to Ichiraku Ramen Bar. After seeing Kakashi's face as he eats ramen, she is shown to be very much infatuated with him.
Ayame has long brown hair, eyes of the same colour and fair skin. She wears a white robe with the sleeves folded, some kind of dark blue apron with ribbon ties at the top and a bright white bandanna.
In the anime, right before the third stage of the Chūnin Exams, Ayame served Naruto an expensive bowl of ramen, as thanks for him being their favourite customer. It surprised him.
In the anime, Konohamaru runs into her when he has to go to the bathroom, she then helps him up.
In the anime, she was kidnapped by Hakkaku, a cooking-nin from the Land of Lightning. He would return her only if Teuchi gave him a special recipe to make people love their meals. The secret recipe was just to remove the bitter taste from the soup; When Ayame is rescued, she has grown fat due to being unable to resist the cooking ninja's food. To bring her to her regular self, she eats Teuchi's diet ramen that appears to be designed to make people lose weight from eating it.
Ayame made an anime cameo with many other female characters when Naruto dreamt that he had 'peeked' into the girls section of a spa.
In Part II, after Naruto returns from his nature manipulation training session, Ayame has been replaced by two less-than-competent male cooks, Nishi and Matsu. Ayame had left for a trip sometime earlier, thus the new workers. The two are rather clumsy, seen when Matsu puts his finger in the ramen and then Nishi accidentally spills hot ramen on his co-worker.
In the anime, Ayame returns after training and seeing the cuisines of other countries and turns the Ramen bar into a Tsukemen bar. This angers Naruto when he comes to the bar, exhausted after a nature manipulation training session. Even though he is obviously tired, he bickers with Ayame for several minutes until finally he accepts the tsukemen, although he combines the two dishes to make ramen, much to Ayame's outrage. 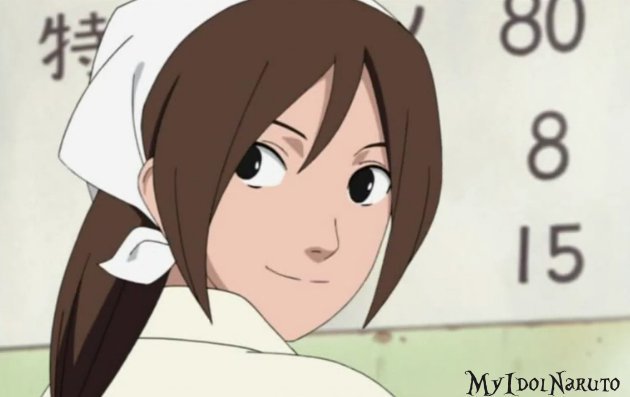