The baku (貘, baku) is the personal summon of Danzō Shimura.
It is a gigantic elephantine chimera, large enough to dwarf Sasuke's Susanoo. It has tiger-like limbs and bandages wrapped all around its head similar to Danzō. It is predominantly dark orange in colour with the exception of its trunk, legs and the markings around its eyes. Its feet are also striped; reminiscent of those of a tiger and it also has huge tusks and what looks like a beard, as well as long, sharp claws.
The Baku is said in legend to be able to devour dreams and nightmares, a fact that Tobi also echoed. When it opens its mouth and inhales, it can create a powerful suction that sucks in everything within a large radius, while at the same time exhaling through its trunk. Danzō uses this suction in conjunction with his own Wind Release techniques to amplify their power. It was strong enough to break the defences of Sasuke's Susanoo.
Danzō attempted to use it to draw in Sasuke's Susanoo and also took advantage of the suction to increase the power of his Wind Release: Vacuum Serial Waves which together created an opening in Sasuke's Susanoo creating an opportunity for Danzō to attack. However, using the suction to his advantage Sasuke launched a fireball into its mouth, the vacuum also increased its size and power of Sasuke's technique which forced it to retreat. 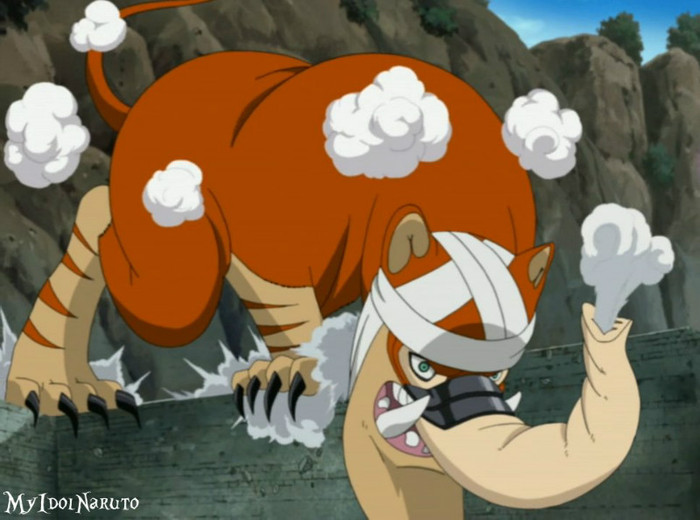