Torifu Akimichi (秋道トリフ, Akimichi Torifu) is a Konoha shinobi.
During the First Shinobi World War he was part of a team consisting of Tobirama Senju, Hiruzen Sarutobi, Koharu Utatane, Homura Mitokado, Danzō Shimura, and Kagami Uchiha. When they were being chased by Kumogakure's Kinkaku Force and Kagami surmised that someone had to lure them away from the rest of the squad Torifu said whoever that person was would essentially be a sacrifice. Decades later he was seen alongside Hiruzen, Homura, and Koharu and other shinobi directly engaging the Nine-Tails after it was set loose on the village.
Torifu has short spiky brown hair and dark markings around his eyes. Like all other member of the Akimichi clan, he has a very robust build and markings on his cheeks - another custom of his clan. In his youth, he wore the standard black suit and armour of the time, hand-guards, forehead protector modelled to resemble a hat and carried a pouch tied to his back. Several years later during the Nine-Tails' attack on Konoha, Torifu now noticeably older, wore a more modern style of armour with his clan's obligatory kanji for "food" (食, shoku) on it. He also carried a bō and a shield that was reminiscent of a sakazuki.
Although the full extent of his abilities are unknown, as an Akimichi clan member, Torifu can convert calories into chakra in order to perform his clan's secret techniques. He was also seemingly proficient with wielding a bō. 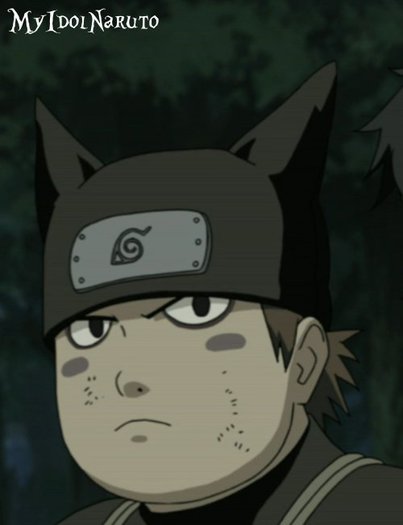