C (シー, Shī; Viz "Shee", English TV "Cee") is a jōnin-level shinobi from Kumogakure.
In contrast to his easy-going partner, C is portrayed as a very serious individual normally seen with a look of self-assured confidence on his face. He often puts duty above all else as shown when he told Darui there was no time for rest upon their return from the Kage Summit as they had to begin planning immediately. He also seems to have a slight dislike for Konoha ninja, calling Naruto's group "Konoha dogs".
C is a young man with short blond hair and dark eyes. He wears a sleeveless black shirt with a one-strap-over-one-shoulder white flak jacket, forehead protector, black elbow-length arm guards, and the red and white Kumogakure shin-guards.
C is a sensor type shinobi, allowing him to sense the chakra of others even from extended distances. Additionally he is a medical-nin which allows him to play an even greater support role on the battlefield. He also appears to be very knowledgeable on foreign shinobi techniques, as he is shown recognising Sasuke's Mangekyō Sharingan along with Amaterasu. C was able to deduce how Sasuke's Blaze Release worked after only seeing it once. C is a skilled genjutsu user, as he was shown using Lightning Illusion Flash of Lightning Pillar, followed by a second genjutsu within the first.
All of these abilities also imply a mastery of multiple skills requiring very fine chakra control.
Also of note is when he went to defend the Raikage from the bodyguards of the other Kage he took a defensive taijutsu stance, implying he is competent in close combat as well.
C and Darui were chosen to escort the Fourth Raikage to the Kage Summit in the Land of Iron. During a brief rendezvous with Team Samui en route, C senses that they have been followed by Naruto, Kakashi, and Yamato. The Raikage speaks to them and they continue on their way. Once they arrive and the meeting begins, C and Darui comes to the Raikage's defence following his outburst, blocking the attacks of the other Kage's bodyguards. They return to their posts after things settle down, only to again come to the Raikage's side when Zetsu appears. Zetsu reveals that Sasuke Uchiha, Killer B's captor, is nearby, so C and Darui accompany the Raikage in tracking Sasuke down.
C locates Sasuke and his team and reports a number of samurai casualties as they get nearer. When they arrive, C uses Lightning Illusion Flash of Lightning Pillar to blind Sasuke and his team, creating an opening for the Raikage and Darui to attack. The Raikage then instructs C to find and eliminate Sasuke's sensor. C is not able to defend himself properly during his search, and despite Darui's attempts to keep him safe he is struck by one of Sasuke's genjutsu and passes out. Darui revives him and helps him get to his feet, and together they observe the Raikage's fight with Sasuke. The Raikage is eventually struck by Sasuke's Amaterasu and is forced to cut off his arm. C stops the bleeding and silently worries about how far the Raikage was willing to go.
While the Raikage is being healed, Sasuke escapes. They follow him to the Summit hall, where Tobi explains his Eye of the Moon Plan to them. As part of his explanation he reveals that B only pretended to be captured; C sighs at this most recent example of B trying to get some vacation-time, which does not surprise Darui. After the formation of the Shinobi Alliance, C joins the Raikage in searching for B. Before they leave C tells the samurai that two members of Sasuke's team are still in the area.
From several miles away, C is able to detect B's chakra contained within a large sphere of water. When they get there they find B fighting Kisame Hoshigaki. C thanks Kisame for producing the water dome and thus helping them find B. After Kisame is "eliminated" they all return to Kumogakure. C later attends a war meeting where he advises the Raikage on how to form a reconnaissance team to find the Akatsuki base.
When the war begins, C is placed in the Sensor Division. C was a bit unsettled since it is the first war he would ever fight in. However, Ao told him that if they did their jobs well they could have a huge impact on the outcome of the war and not to slack off. 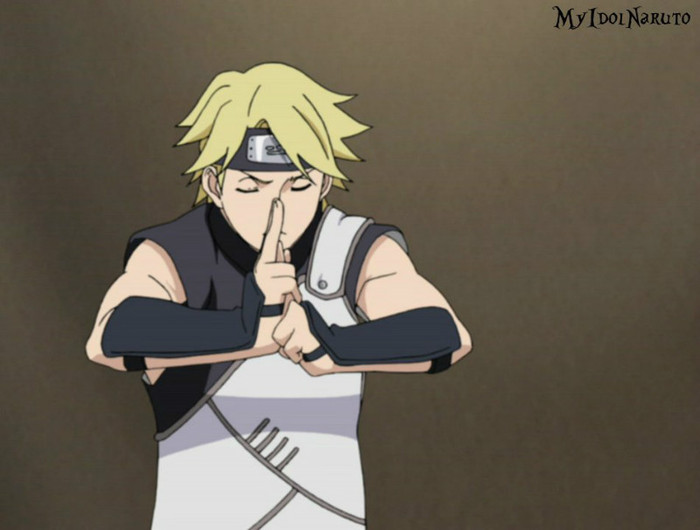 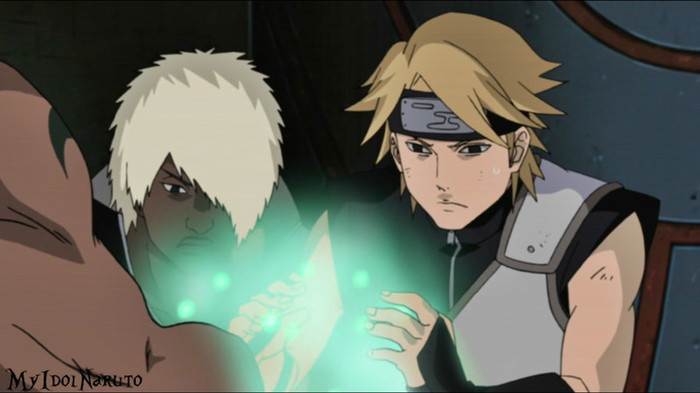